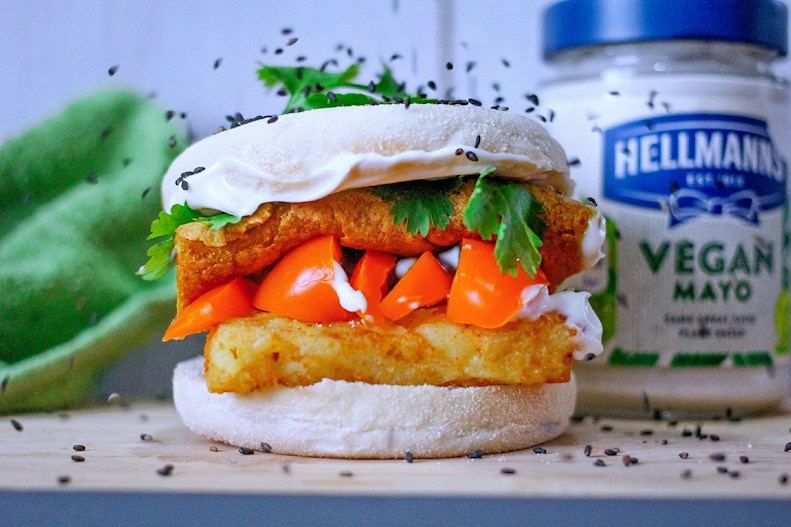 Breakfast is my favourite meal of the day, by far! I don't know about you, but most days I will choose a savoury breakfast over a sweet one. It's funny, because I've always had a huge sweet tooth, but it usually doesn't kick in until later in the day, at around 3pm. And funnily enough, having something sweet first thing in the morning is not what I usually crave. Still, I alternate my breakfasts between sweet and savoury. Sometimes, I'll have overnight protein oats with chia seeds, oats, protein powder, cinnamon and either blueberries or banana - certainly a healthier option when compared to a breakfast muffin; but other times, you just want that full-on savoury and rich breakfast. And if this is one of those days for you, I say you HAVE to try this recipe!

I don't think I've ever had a proper breakfast muffin before today. And no, I'm not even exaggerating. I swear I hadn't! Mostly because restaurants and fast-food chains that offer this option are never vegan. So there's never a vegan option, and if there is, let's be honest...they haven't mastered it quite yet! And sure, I could have re-created this at home many times, but the main problem I had is that I am not the biggest fan of the vegan eggs out there. Until now...

So the other day I decided to give this a go myself! I mean, if all I have to do is get the ingredients I want, why not re-create a breakfast muffin in the comfort of my kitchen, right? At least, I know everything that's in it, how it's cooked, and I have a say in what goes in it.

So off I went the night before to a supermarket, and I stocked up on everything I needed: english muffins, tomatoes, hash browns and fresh herbs. Everything else, I already had in my pantry: the vegan egg mixture, sesame seeds and vegan mayo.

In the morning, I seriously considered whether or not I should toast the muffins slightly but I opted out, and I'm glad I did so. I cooked the hash browns in the air fryer until crisp, and the vegan egg took me about 5 minutes to make.

I used the brand Terra Vegane (you can find them on Instagram here and check their website here). I absolutely love the brand and everything they stand for. With a clear mission to create vegan alternatives, with a well-balanced mix of flavour, nutrition, compassion and creativity, I was immediately attracted to the brand, and I had my fingers crossed that their product would be tasty. I had tried one other vegan egg brand before and I was so disappointed that I never since tried any other brands because I thought it was a waste of money if the flavour would be similar to the other brands I tried. But with this one, I was in for a huge surprise!

Upon opening the product, you can immediately smell a strong scent that made me question whether I'd made the right decision in purchasing this product, but I knew this from the reviews I'd read, that even though it doesn't smell great, it tastes incredible. So I was still hopeful.

I cooked the vegan egg with some red sweet peppers, onions, chives and a dash of salt and pepper, and then added it to the muffin, on top of the tomatoes. I finalised everything with vegan mayo to bind everything together, and black sesame seeds for the top. I used the Hellmann's vegan mayo, but I usually alternate between Hellmann's and Vegenaise. Both very tasty, but the Hellmann's might be my favourite. Not sure why, perhaps it's because it is slightly more vinegary than the Vegenaise.

Finally, I added my parsley and took my first bite before it got cold. The taste? Out of this world! The different textures of the soft muffin with the crispy hash browns, and the softness of the egg all came together like Beethoven's 9th symphony! I just couldn't believe it!

Do yourselves a favour and try this recipe. I promise you won't regret it. Let me know in the comments if you do re-create this.